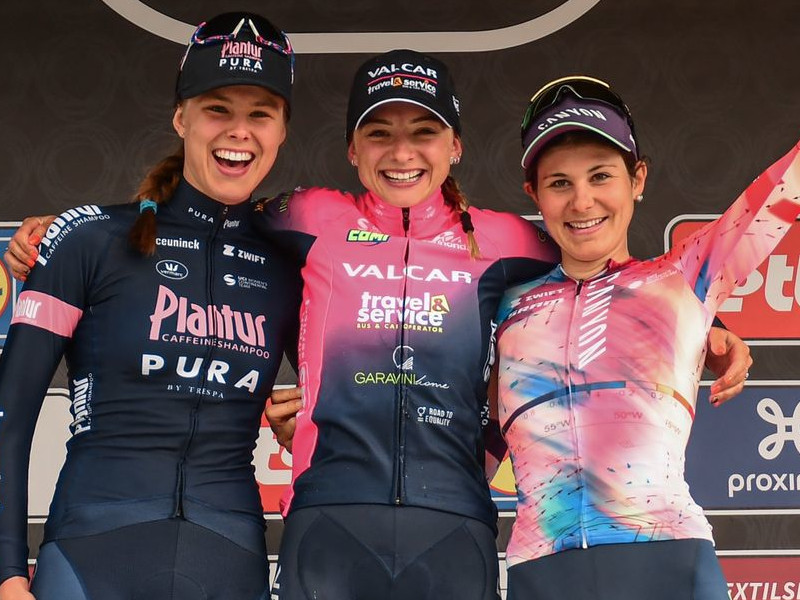 Chiara Consonni sporting resume is enriched with a precious relic. The 22-year-old won the Dwars door Vlaanderen in Waregem (Belgium), giving Valcar – Travel & Service the first success of the season.

Chiara Consonni beated Julie De Wilde and Elise Chabbey in the reduced bunch sprint, at the end of a race perfectly conducted, especially in the final kilometres.

The race explodes 30 km to the goal, due to the forcing of Ellen Van Dijk, Elisa Longo Borghini and Annamiek Van Vleuten. In the leading group, included almost 40 athletes, there are also the girls directed by Davide Arzeni.

With 17 km to go, Margaux Vigié makes a pivotal effort to peg Brodie Chapman and Floortje Mackaij back.

In the chaotic final, Chiara Consonni proves her ability staying in the leading group, even when, the European champion Ellen Van Dijk tries her last move to go early.

The finish straight becomes the ideal launch pad for the Valcar – Travel & Service’s sprinter, who win ahead all the listed rivals.

«I am very surprised, considered that last Sunday, at Gent – Wevelgem, my feelings weren’t so good», Chiara Consonni told to Eurosport. «Today I left without expectations, thinking of gearing up forRoubaix. But climbs after climbs I realized that my shape was good, so we worked to get to the sprint».

« As soon as I saw the 200 metre mark, I started my sprint. I got passed Marie Le Net. I have to thank my teammates who worked for me and protected me. They’re mostly climbers but worked hard for me, as did the staff. Thanks to our sponsors too. Moreover I’d like to dedicate this win to my grandmother who is in hospital and is not too well. She’s supported me all the time».