Gp Oetingen in Belgium: Elisa Balsamo wins in the sprint ahead of Jolien d’Hoore and Marianne Vos 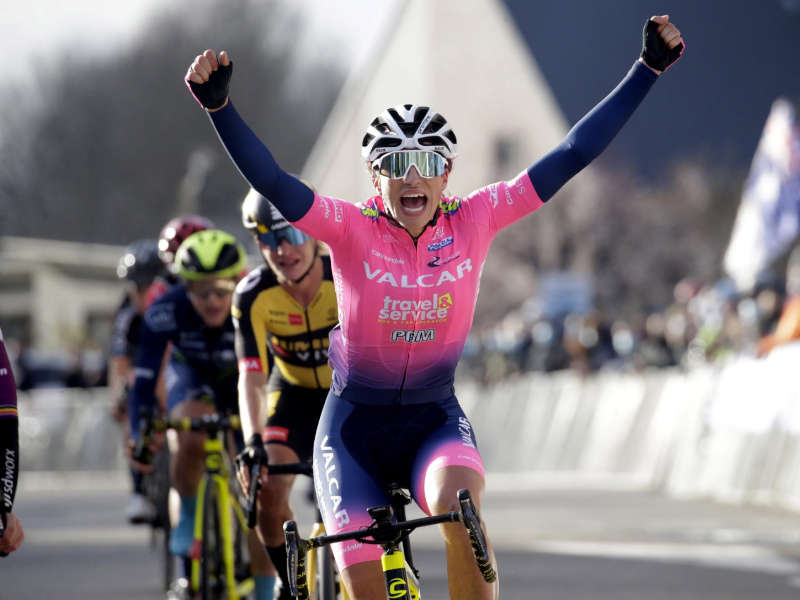 First victory of the season for Elisa Balsamo who beated in the sprint two great like Jolien d’Hoore and Marianne Vos at GP Oetingen at the end of a race conducted in an exemplary way by all the Valcar – Travel & Service athletes.

The race conduct of the girls directed by Davide Arzeni was simply impeccable. The 117.5 km race featured an 11.75 km circuit to be repeated 10 times with the Bergsraat, a 500-meter stretch with an average gradient of 8% and two sections on cobblestones.

For half the race the group remained compact due to the strong wind, then the situation changed. The attacks of Vos, Roy, Chabbey and Canuel changed the face of the race with a selection that led to having a group of 18 athletes at the head of the race including Elisa Balsamo, Chiara Consonni and Vittoria Guazzini.

Throbbing the last 12 km. To anticipate the restricted sprint, Kristen Faulkner and Aude Biannic went on the attack, and werw able to reach a maximum advantage of 23 seconds. Five kilometers from the finish, the two fugitives were caught, but Aude Biannic attempted a new attack in the company of Vittoria Guazzini.

This second attempt was also neutralized and in the final sprint Elisa Balsamo confirmed her extraordinary aptitude for sprinting, beating two champions such as Belgian Jolien d ‘Hoore and Marianne Vos. With this victory Elisa showed that she is one of the women to beat for the next big events, the first of which will be Danilith Nokere Koerse (Tuesday 17th) where Chiara Consonni, Eleonora Gasparrini, Vittoria Guazzini, Silvia Persico and Ilaria Sanguineti will also race.