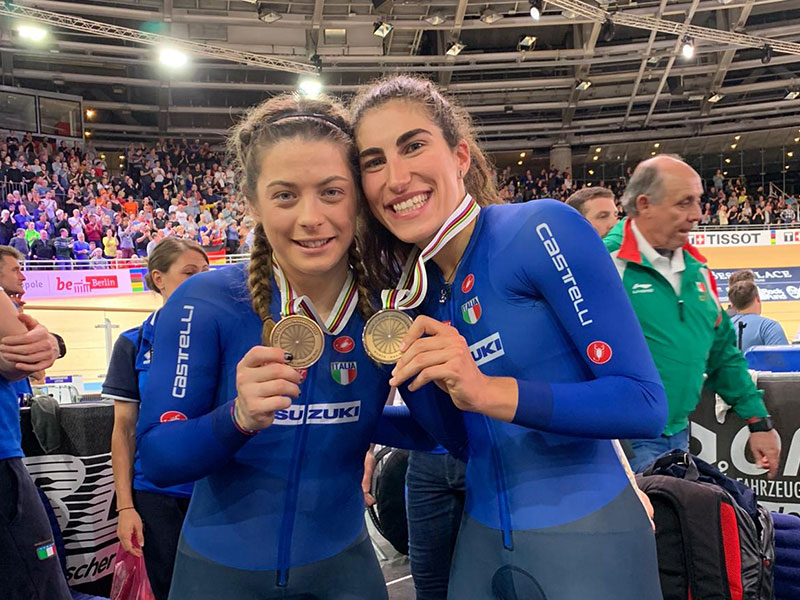 Dreaming of a medal at the next Tokyo Olympics can and should be done. Yes, because today the two Valcar – Travel & Service athletes have made a fundamental contribution to the Italian cause by waving the flag of Italy on the podium of the World Championships on the Berlin track. & . An unforgettable afternoon the one of Miriam Vece and Elisa Balsamo who lived two completely different stories in the world championship, but who in the end were able to conquer a bronze that is worth gold.

To lead off the dances of this unforgettable afternoon was the 1997 class Miriam Vece who made the eyes of the experts widen, because in these two days she has rewritten the history of cycling on the Italian track. Already on Friday Miriam had shown to have an extraordinary shape by lowering the Italian speed record by about 3 tenths from 10”832 (always recorded by herself) to 10”580. In the round of 32, however, Miriam had to bow to the multi-medalist Simona Krupeckaite. But today was another story.
As much as Miriam Vece was one of the most accredited athletes given her personal ranking in the 500 meters (she was 4 / a in the world specialty ranking) the girl from Romanengo (CR) has exalted herself in her favorite discipline by twice lowering the Italian record 34”046 always recorded by her at the European Championships in Glasgow. In fact, first in qualifying Miriam triggered the stopwatch on the time of 33”410 conquering the fourth fastest time, then in the final she exalted herself by stopping the hands on an incredible 33”154 which earned her a bronze that makes her dream for the next Olympics.

Elisa Balsamo has a completely different story which we saw for the first time about her human side and her ability to know how to suffer. Yes, because after years in which “the Piemontese extraterrestrial” has struck a series of super performances on the track in the various World Cup tests, this time Elisa was hit by a bad influence a few days before the competitions. For her, Friday was a day to forget: if in the morning there was the joy of having recorded the Italian record in the quartet together with Alzini, Paternoster and Valsecchi, in the afternoon Elisa had even detached herself from her teammates compromising her performance. Well, despite a Friday of difficult physical and emotional management, Elisa raised her head like a true champion, disputing a madison to be framed in pairs with Letizia Paternoster. Memorable the sequences of this race with a decidedly more on the ball and in amazing shape Letizia, more than Elisa who gritted her teeth and fought bringing home 5 decisive points halfway through the race. In the final the two blue ones even touched silver. Once again a sumptuous Letizia Paternoster anticipated the sprint to the minus 3 laps, then gave the change to Elisa Balsamo on the penultimate lap that attacked in first position with the French athlete at the wheel who managed to burn her in the finish line only for an inch. A little bad. For the two blue has arrived a bronze that is worth gold and that literally makes you dream in view of the next Tokyo Olympics.